There was a period of two weeks in Huntington Beach and Pacific Beach. Darcy and I surfed a lot and the three of us settled in to a routine daily purchase of 1.75 L of spirits. There was a little shock in realising the magnitude of our alcohol habits but no great desire to do anything about it. In fact, having planned to stay a little under a week in Pacific beach, we added to the daily routine a walk to the office (at Campland on the Bay) to extend our stay by one day. This had partly been because our plans to visit the Havasupai Falls were foiled by severe flooding in the previous season. Robbed of the chance to put down the bottle and get back to nature with a multi-day hike to the falls, we stuck to what we knew, plotting a course to Lake Havasu City for a March 14 arrival – Spring Break. We drank some more, we hired a speed boat, had a little wakeboard and drank some more. Darcy documented this (see thumbs below). Speed boat day was unanimously one of the best days of the trip and I’d recommend a summer day on Lake Havasu to anyone. Sure, the boat was like $500 USD for the day but with Arizona’s lack of licensing restrictions on a MANY horse power engine and a blood alcohol limit of 0.08%… well, you just can’t recreate this in too many places. In the trip vernacular it was ‘all-time’. 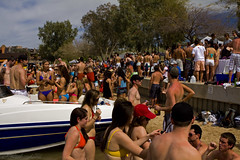 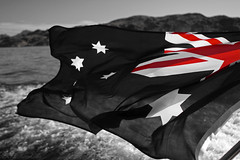 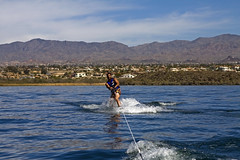 The intervening period from here to the Grand Canyon included a few awful days at a portable home village for +65s (year old)  in Mesa, Pheonix. Our plan to stay in Tempe, in the midst of ASU, had been ill-conceived as the dates clashed with Spring Training meaning there was no room in the inn. Next was a nice stop over in Sedona, thanks to our local tour guide, Belinda. It’s a well-worn tourist spot so rather than boring you with narrative, I’ll simply add that in summer one must check out Slide Rock – a natural sandstone water slide carved out by a creek. In spring it’s really cold – around 5-10º C. We were the only one’s in the water, bringing entertainment to the  more sensible on-lookers.

We arrived at the Grand Canyon with equally grand plans of adventure but less than grand physical condition on the back of a month-straight boozing. The afternoon we arrived, we caught a great sunset from Yaki Point (gallery above) and grew full of excitement for the next full day where we planned to walk someway down and back up the canyon. Subpar physical condition and unbridled enthusiasm  would conspire with a lack of preparedness in a day-long, 27 km, 4000 ft (descent/ascent) ordeal. We set off on a descent of the South Kaibab Trail at around 6 am. The plan was to go the modest distance to Skeleton Point and back. When I say unbridled enthusiasm, I mean that we quite literally ran down the trail. We reached this spot in about an hour and wholly unsatisfied with this we decide to go all the way to the bottom instead. The rest of the way was suitably rewarding and hopefully the images above convey some part of that. We ended up at the Bright Angel camp in good spirits and ate some lunch. From there we decided to ‘mix it up a bit’ (another piece of trip gospel) and remove ourselves via the Bright Angel trail. This was meant to be the easier walk after all. To tease out ‘lack of preparedness’, we followed the schematic on the park sign for the Skeleton Point walk to the best of our ability. It depicted two sandwiches and a bottle of water. As coarse a guide as this is, it was probably pretty accurate. They didn’t have a food-based pictorial guide for the full top-bottom-top trip, only this: “DO NOT attempt to hike from the canyon rim to the river and back in one day. Each year hikers suffer serious illness or death from exhaustion”. We showed them! But only just.

Our 3 hour descent set us up for a 6 hour ascent and the most telling thing is the lack of photographs about 3 hours in to this ascent. It had turned in to the most uninspiring trudge taking place at an embarrassingly slow pace. We set ourselves goals of 1000 steps, and it was really just that the counting kept us talking. For the most part, we knew we’d bitten off more than we should have, but there was no question that we would make it out with relative ease. There was  a definite turning point. We’d had some jelly beans that we were snacking on on the way back up (ironically they’d been a very controversial addition to the shopping basket) and there came a point where we ominously counted out the remainder of our food – about 5 jelly beans each. A little while after this, feeling properly disheveled but soldiering on, a ranger skipped merrily down the trail on walking poles as if on four legs. Probably no stranger to the sight of our ilk, he stopped and ask if we were OK. Darcy responded “Aaah yeah, I mean, do you know where we are?”. Not yet ready to swallow my pride, I jumped in and clarified that we were fine. We were battling. From here we were doing a single switch back at a time and we sat down constantly, only standing up because we realised we’d black out if we sat down. I’ve never bonked before but by the time we reached the rim, the 3 of us were perilously close. We laid siege to a restaurant a few hundred metres from the trailhead. The conversation with the waiter was completely incoherent but he figured out quite accurately what we needed.

The objective danger was always pretty low (though potential for embarrassment was high), but having since been in climbing situations with quite high objective danger, it’s interesting what a difference being prepared, equipped and in control means to your perspective at the time. We learnt our lesson and carried a lot of food in what would total 160 km of walking in the week and a bit to follow…

This site uses Akismet to reduce spam. Learn how your comment data is processed.