July is summer in the northern hemisphere – news to this Antipodean once as a child and then again more recently on Monte Rosa. I’ve since checked once more. During a two-week stay in Les Houches prior to this climbing adventure, rain had been the recurring theme in continually unsettled weather. Hindsight has mad a mockery of our ambitious plan to link peaks across the Monte Rosa Massif day in, day out for a week with little (no) allowance for bad weather. The plan included a series of peaks of slightly increasing difficulty across the Massif; Vincent’s Pyramid, the subsidiary tops of the Signalkuppe (Parrotspitze, Ludwigshohe, Corno Nero, Balmenhorn), popping over to Castor and Pollux before trying something on the Breithorn peaks. Accommodation was to be of the ‘tent’ variety. Like many great mountaineering tales, the following is the story of how thing didn’t go to plan – perhaps the extent of the similarities. 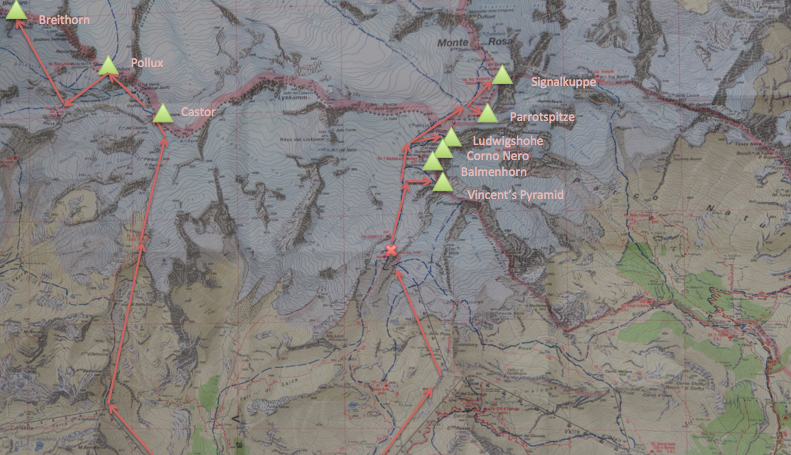 The (unadjusted) plan for a 7-day assault on Monte Rosa. Bad weather would make short work of the ambition contained within.

With my climbing companion, Mikey, quite constrained by work commitments and due to fly in on a Saturday to commence climbing on Sunday, I decided that one of us should be at least a little acclimatised. It made sense for one person to be clear headed but it would also hopefully mean I could give Mikey the hypoxic baptism of fire that I had received from the indefatigable Professor Tom Povey on my first alpine adventure. To that end, during the late stages of my stay in Les Houches, I went for a walk up to the Tête Rousse Refuge (3167 m) to spend the night at an altitude that would hopefully trigger a cardiovascular response. That the Tramway du Mont Blanc wasn’t running that morning was a slight annoyance – I knew I had the full walk from roughly 1800 m in me. To reach the final train stop at Nid d’Aigle (2380 m), much more tired than planned only to find I’d forgotten my lunch was salt in the wound. Reaching the hut with a mighty hunger meant a pre-dinner omelette on arrival. While inhaling said omelette, I met a British couple who had arrived after abandoning plans to climb Mont Blanc via the Three Monts route. The Goûter Ridge was a safer route in the conditions at that point. Much like my friend who hopes one day to turn up to a cricket test match to find Australia a man short, I was daydreaming of being pulled in to a climbing party for a shot at Mont Blanc – just as a warm up for the week. No such reality materialised and probably for the best. The next morning presented some of the best weather in weeks and it was a nice feeling to know that the friends I’d made would likely see success. The crisp air, bluebird skies and blazing sun called for a jog down to the tramway, GoPro mounted to chest. A free train ride down eased the pain of the previous day and provided a full day to enjoy in valley before making movements towards Gressoney.

It turns out to be quite difficult to get from Chamonix to Gressoney via public transport. I must admit that car hire had been recommended prior to the trip. I herby endorse and pass on that piece of advice. After meeting Mikey in Courmayeur, several local buses were negotiated to see an afternoon arrival in Gressoney (Stafal). Not getting lost or missing any buses were genuine highlights of an otherwise tedious day. It was worth the trouble to arrive at the foot of Monte Rosa with a looming sense of adventure. Our last (planned) evening of regular luxury was made all the better by the incredible value hospitality available in the off-season in Gresonney. Value is rarely something you think of in Chamonix. We ate like we wouldn’t see real food for another week. That we would again within 48 hours, and that this would be somehow disappointing was one of those quirks of mountaineering.

I’ve attached some of the landscape favourites in the gallery above, reserving the climbing shots for part 2!

If you managed to miss the video from this trip – https://benjaminhallphoto.com/alpine-summer-motion/ !!!

This site uses Akismet to reduce spam. Learn how your comment data is processed.

« Alpine Summer in Motion (Video)
Monte Rosa – Part 2 (Gallery) »
We use cookies to ensure that we give you the best experience on our website. If you continue to use this site we will assume that you are happy with it.OkNoPrivacy policy
Revoke cookies